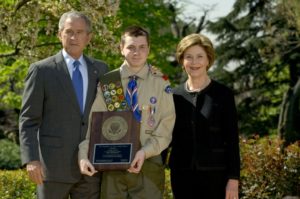 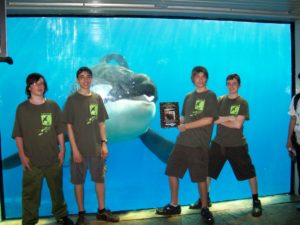 Get the Lead Out of Fishing was honored with a $10,000 grant to continue work on the project.  So far, some of the money has gone to additional supplies for kits. Browne is also working on creating public service announcements (PSAs) for the project so that people can make responsible choices BEFORE they go fishing.

Yes – that is Shamu helping to present the award!  Browne and four members from St. Agathas Troop 5 Milton traveled to Orlando where they met other teams of environmental activists, presented their project, and enjoyed the hospitality (and fun) of being at SeaWorld Orlando! 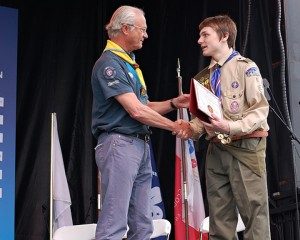 Browne received this award from King Carl XVI Gustaf of Sweden during a Boy Scout event in Boston in May 2009.  Boy Scouts of America and World Scouting representatives cited this project for its outstanding contribution to the environment, and for contributions to Scouting. 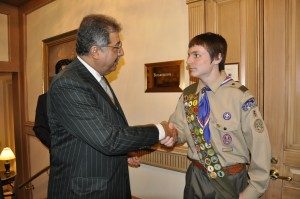 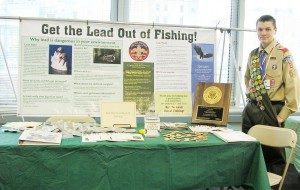 Browne was one of the invited exhibitors at the annual Environmental Protection Agency (EPA) Green Expo. The Expo highlighted green alternatives for everyday living and was attended by hundreds of people. Browne collected lead fishing weights and handed out educational materials. Most attendees were shocked to learn that their favorite sport could be harming waterfowl and raptors. 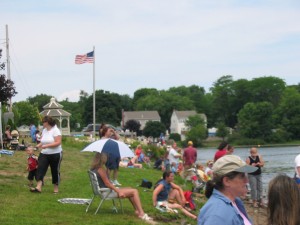 Browne and members of St. Agathas Troop 5, Milton, Massachusetts attended fishing derbies throughout the Boston area. They handed out nearly 800 packages of sample lead-free fishing weights and collected nearly 65 pounds of lead. This means that approximately 8,000-10,000 lead fishing weights have been removed from our lakes and ponds.

More importantly, while at the derbies, they talked with nearly 1000 anglers and had the opportunity to educate anglers about the dangers of lead. Local and regional newspapers, national magazines and video and television interviews also helped spread the “Get the Lead Out of Fishing” message to tens of thousands of anglers. 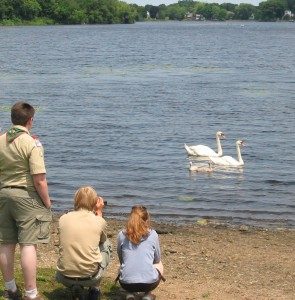 Update: Get the Lead Out of Fishing had its first kits rolled out to 2 fishing derbies this summer (2009). I supplied lead-free samples, brochures, lead fact cards, and buttons to over 300 more anglers!

These swans and their baby cygnets came by as we were setting up at Whitman’s Pond Fishing Derby. Because of the lead collected at this derby, thousands of fewer lead sinkers could end up in this pond which is home to many swans, ducks and other waterfowl. 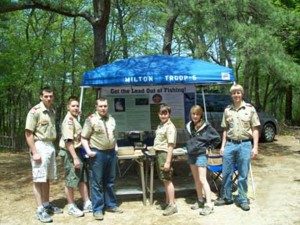 Members of Troop 5 and the Get the Lead Out of Fishing Team set up the display at the Massasoit Fishing Derby in Plymouth, Massachusetts. This derby was for Cub Scouts and was a great opportunity to reach the youngest anglers – and their families – and teach them about how lead kills waterfowl.

Browne has packaged up over 2000 sample packages of weights to hand out to anglers at fishing derbies and educational events. Browne received donations and discounts which allowed him to reach an even greater number of anglers. Because he was able to call on his Scout Troop for assistance to assemble the packages, Browne could really make his small grants and donations go pretty far. 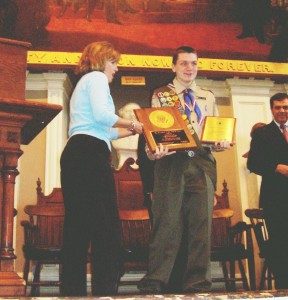 Browne at Faneuil Hall, Boston, on Earth Day, April 22, 2008. The Environmental Merit Awards highlighted the projects and lifetime achievements of people working to make a difference for the environment.

The project was cited by Steve Johnson, Director of the EPA in his keynote address. Get the Lead Out of Fishing was the only teen-led project that was honored with an award. 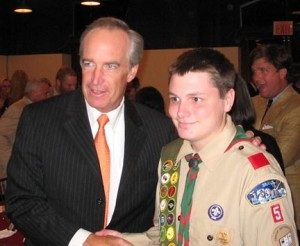 Browne’s project was honored in New York City in September, 2007 at Field & Stream magazine’s “Heroes of Conservation” award ceremony. His project was selected as the first-ever Boy Scout recipient of the award.

His project was cited by keynote speaker, United States Secretary of the Interior Dirk Kempthorne (with Browne at left) and Director of US Fish and Wildlife H. Dale Hall who presented the award to Browne. 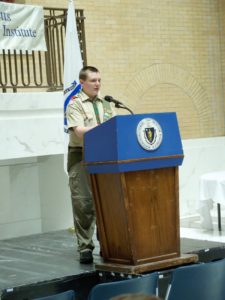 Browne had the opportunity to present his project at the Massachusetts State House in June 2007. He set up a table display with sample packages of non-lead weights and educational materials to get state legislators to support removing lead from recreational fishing. 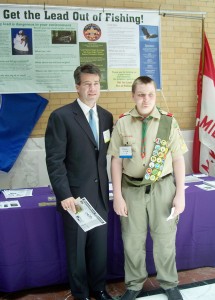 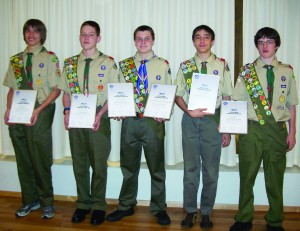 Get the Lead Out of Fishing was selected to represent the United States at Volvo Adventure, a United Nations sponsored environmental program.  Browne and four members of Troop 5 Milton (from left, Graham Strang, Robert Hudson, Mike Browne, Alex Jamal, and Matt Morris) travelled to Gothenburg, Sweden, where they met with 15 teams of teens from around the world. Projects included water drainage cleanup to prevent malaria in India, saving endangered sea turtles in Comoros and reviving and breeding endangered water buffalo in Macedonia. While there, the teams prepared a white paper for the United Nations on water issues. 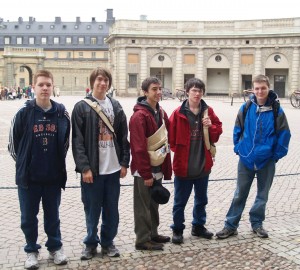 The teens participated in team-building exercises and spent a lot of time strategizing about how to further their projects. The highlight of the event was a presenation before an international panel of judges including representatives from the United Nations, World Scouts, and the World Wildlife Fund. Siv Persson from the World Wildlife Fund highlighted the accomplishments of “Get the Lead Out of Fishing” and talked about the attention that the project brought to a little-known threat to our waterfowl, raptors and environment. After spending 5 days in Gothenburg, the team traveled by train to Stockholm where we had 2 full days of sightseeing including touring the Royal Palace in Stockholm, watching the changing of the guard, and enjoying the warmth and hospitality of Sweden.