Animals with lead poisoning will exhibit physical and behavioral changes, such as loss of balance or tremors. This makes the animal more vulnerable to predators. Birds have trouble taking care of their young, feeding or nesting. Lead poisoning often kills the birds 2-3 weeks after ingesting the lead.

How do birds and fish get poisoned? Waterfowl such as ducks, swans and loons scoop food and pebbles off the bottom of ponds. They ingest lead fishing weights thinking the lead sinkers are stones that will aid in their digestion. The lead gets into their stomachs and dissolves, poisoning the bird.

Fish become poisoned when they swallow lead fishing weights on fishing lines. Birds of prey such as eagles and falcons eat the poisoned fish and waterfowl, the lead ends up in their stomachs where it can slowly poison the birds.

Is lead really that big of an issue?

Research studies in New Hampshire, Minnesota, Wisconsin and Michigan estimate that up to:

are due to lead poisoning. 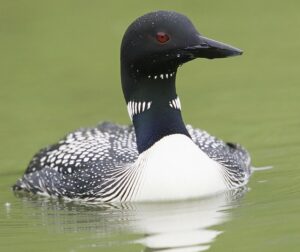 Yes…lead really is a big issue!

But it’s just one small weight, how bad could it be?

Fishing tackle manufacturers produce nearly 480 million sinkers every year.—and 98% of those are made of lead.

What does this mean? t’s estimated that 1 fishing weight is lost every 6 hours per person fishing (North American Journal of Fisheries Management 26:206-212, 2006) 3000 tons of lead fishing weights are produced every year-primarily to replace the ones lost while fishing. (Audubon Society-water bird conservation study)