Mike Browne’s project has received recognition and awards from national and international groups. With assistance from members of St. Agathas Troop 5, Milton, Massachusetts, tens of thousands of anglers know about the dangers of lead in our environment. Project awards means more people get to hear about the mission to Get the Lead Out of Fishing! 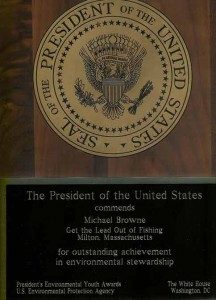 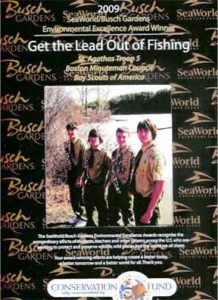 SeaWorld honors (and funds) ongoing environmental projects of outstanding merit.  The $10,000 grant has already paid for additional supplies and  materials.

The grant will also allow Browne to produce and distribute public service announcements (PSAs) to get anglers to make the responsible decision when they purchase their fishing tackle. 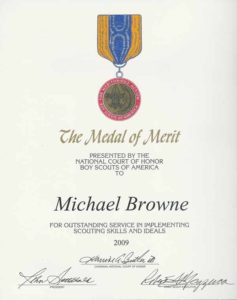 Browne received this highest honor in Scouting for his work on Get the Lead Out of Fishing while overcoming personal challenges.  The Medal of Merit is awarded for outstanding acts of service and exceptional character. 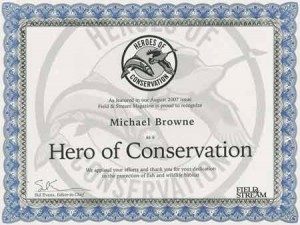 Won Field and Stream Magazine’s “Hero of Conservation Award.” First ever Boy Scout division recipient. Project was cited for excellence by United States Secretary of the Interior, Dirk Kempthorne in his keynote address. Project cited for excellence by H. Dale Hall, Director of United States Fish and Wildlife in his presentation speech. September, 2007. 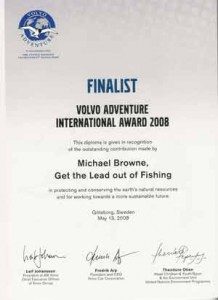 Volvo Adventure US nominee. Mike Browne and his team traveled to Gothenburg, Sweden to meet with teens from around the world. Get the Lead Out of Fishing was presented to an international audience of 1000 environmental activists and representatives from the United Nations, World Scouting and environmental groups such as World Wildlife Fund.

Do Something Award Finalist – 2009 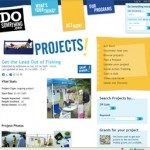 Do Something is a non-profit which supports young leaders who are making significant change in our world.  Out of the thousands of projects evaluated by their staff in 2009, 10 projects were selected as finalist projects.  Over 2 days in New York in May, 2009, all the finalists had an opportunity to meet, learn new strategies to expand and manage their projects, and meet other young leaders. 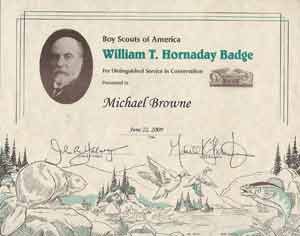 This Boy Scout environmental award was earned by Browne for his Get the Lead Out of Fishing project and for his work to research, build, and install nesting box for peregrine falcons.

This award is presented to outstanding youth for making significant contributions to environmental causes. Browne’s project was noted for its unique approach to education and the simple solution it presented to a difficult and little-known problem. 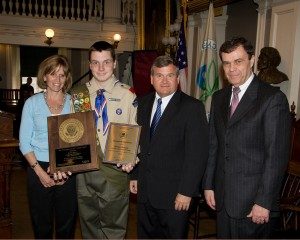 This award was presented on Earth Day, April 22, 2008 by Region One of the United States Environmental Protection Agency (EPA). EPA Director, Steve Johnson, cited this project in his keynote address. April 2008.

Certificate of Merit from WildLife Society 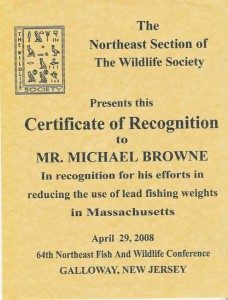 This award is presented for outstanding environmental project. Award presented at their annual conference. April, 2008.

Received citations from both Massachusetts State Senate and House of Representatives. Research for this project was used to help craft Massachusetts Senate Bill 466. Mike Browne testified before the Senate subcommittee to support the legislation.
June 2007

This project was Mike Browne’s Eagle Scout project. To complete the project, he had to submit the project to the Boston Minuteman Council of the Boy Scouts of America. He then organized a team of Scouts to assist with creating the sample non-lead fishing weight packages, attending fishing derbies to educate anglers and hand out samples and other taskes to Get the Lead Out of Fishing. November, 2007.

This project received the first-ever youth grant and was awarded “Champion” status for its success. TURI provided support, advice, and guidance during the project. They continue to support the project’s goals.