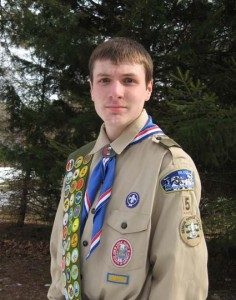 The whole project really did begin with a simple question Mike asked his dad when he was 8 years old: “What happens to all the lead weights we lose while fishing?”  His dad told him to go do some research.  Eight-year-old Mike put that aside until he was trying to figure out his Eagle project, and that question came back to him.  He finally DID look it up, and he was shocked and saddened by what he found.

Browne had expected that the lead would be a source of water pollution, or maybe might poison a few fish.  Instead, he found a little-known environmental hazard: lead fishing weights kills waterfowl and raptors.

He figured if he could tell other fishermen about this problem, they would be willing to swap out their lead weights.  He strategized that going to fishing derbies would be the best way to reach his audience. 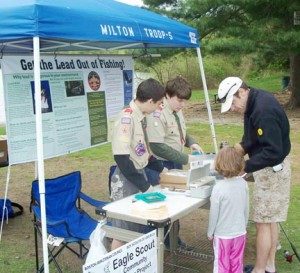 For his Eagle project, Browne set a goal to collect 40 pounds of lead fishing weights and talk to 500 anglers. He wrote nearly 50 letters asking for money and supplies to fund the project.  He found a few supporters. Boss-Tin in Colorado, Wal-Mart in Weymouth, TURI at UMass Lowell were instrumental to getting the original project funding and going.  Through these grants and donations, Browne was able to create 800 sample packages to hand out at fishing derbies.  He did extensive research into the problem and then designed and printed an educational brochure to hand out.  He created a condensed “lead facts” card that he could use as a package insert and hand out at fishing derbies.  He designed a huge banner – and he hit the road! 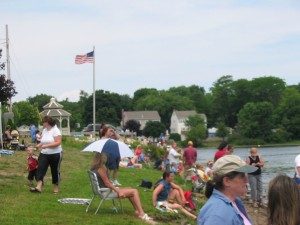 After attending fishing derbies during 2007 and 2008, Browne realized that by the time anglers got to the derbies, they had already purchased their lead weights.  He knew he had to prevent people from buying lead weights in stores.  Browne had a two-part strategy:  make people aware of the problem and make lead fishing weights illegal in Massachusetts. 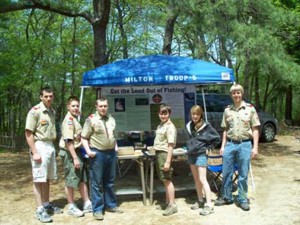 To make people aware of the problem, he started an aggressive media campaign.  His story and project have appeared in over a dozen publications, on television, and in web casts.  He recently received a grant from SeaWorld Environmental Excellence award to create a series of public service announcements (PSAs) to further expand the message. 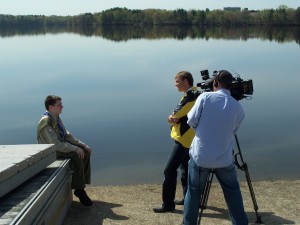 He also realized that he could only attend so many derbies and he needed to enlist other people to spread the word. His new web site has been redesigned to make it easier for individuals and organizations to order kits and supplies. (A BIG thank you to SeaWorld Environmental Excellence award grant for making this happen!)

To date, Browne has distributed about 1500 sample packages, spoken directly with over 1000 anglers, and had his story seen by hundreds of thousands of people through all the media interviews.  He has collected and safely recycled nearly 65 pounds of lead (often 1/16th ounce at a time).

Browne’s activism and research was used to help craft Massachusetts Senate Bill 466.  Browne has testified at both the Massachusetts State House and at a Senate Subcommittee meeting.  Legislators questioned him about his experience with anglers at fishing derbies.  Browne also presented several hundred signatures that he collected on a petition to ban lead weights in fishing.  Surprisingly, Browne found that sportsmen’s groups were most opposed to the Bill.  They are not against banning lead, they are against legislation which regulates their sport.

Browne is very proud that Massachusetts finally passed a law limiting lead in fishing. The law passed in 2009 and went into effect in 2012. Read about the law here.

He started this project in 2007 as part of his Boy Scout Eagle project.  The project is still going on, and he is as dedicated as ever to saving our wildlife.

Browne works as an engineer at a major engineering company in the Boston area.

Browne received his Eagle rank for this project (November 2007). 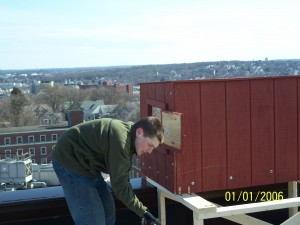 His environmental work was also recognized with the Boy Scout Hornaday Badge. 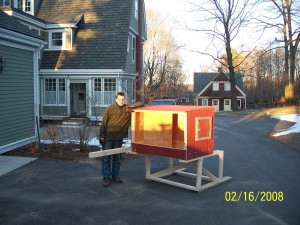 When that crane was sold and was ready to be dismantled, wildlife officials were concerned that the peregrines would not have a new, suitable nesting area.  Working with Quincy Medical Center, which was located at the top of a hill within sight of the crane, Browne researched nesting box building plans, built a modular unit that could be hauled to the roof of the hospital, and then installed the nesting box.  Browne and wildlife officials hope that the peregrines will soon call the new nesting box home.

Update: As of fall 2010, the falcons have been seen visiting and roosting on the box many times.  No nest yet, but everyone is hopeful for the spring. 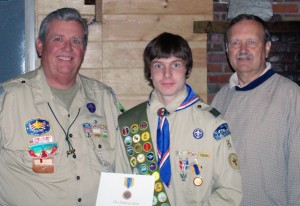 He was also honored with one of the highest awards in Scouting, the Medal of Merit.